Blog » I BELIEVE IN UNICORNS

I BELIEVE IN UNICORNS

Michael Morpurgo’s
I BELIEVE IN UNICORNS 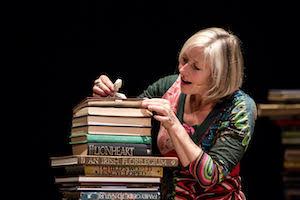 Best-selling children’s author Michael Morpurgo’s treasured story I Believe In Unicorns is brought to life by Olivier Award-nominated Wizard Presents at Lighthouse, Poole’s centre for the arts, on Saturday 12 October.

A tale about the power of books and the bravery of a young boy called Tomas, this intimate show is set in a library full of books that hold more than stories within their pages. Tomas hates reading and he hates school, but his world is turned upside down the day he meets the Unicorn Lady in his local library…

An enchanting and interactive production, I Believe in Unicorns, which won an Argus Angel Award for Artistic Excellence at Brighton Festival, sparks the imagination in both young and old alike as it challenges audiences of all ages not to believe in unicorns after joining Tomas on his spellbinding journey.

I Believe in Unicorns also includes a ‘book swap’ in which audience members are invited to bring along a favourite children’s book (for ages 6 and upwards) to help form part of the stage set at the beginning of the show. At the end the children are invited to swap their book for another one and so have a new story to take home with them from the library. (The book swap is optional.)